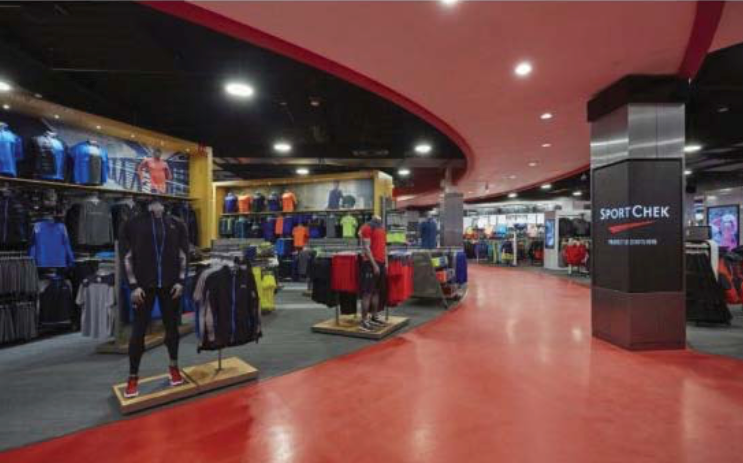 Sport Chek opened its flagship Toronto store at Square One on Thursday, signaling an aggressive brick-and-mortar expansion â but with a strong digital twist.Â The 75,000-square-foot retail outlet, along with a new 50,000-square-foot store at Yorkdale, marks a renewed attempt to weave e-commerce, in-store sales and touchscreen tech in a fashion as seamless as its Lycra sportswear.

Brick and mortar in the digital age

The vast majority of Canadian retail sales occur in stores, not online, says Frederick Lecoq, senior vice-president of marketing at FGL Sports, Sport Chekâs parent company. âBut most of those are going to be digitally influenced.

Online sales take retailers only so far, since customers need the reassurance of trying on a pair of ski boots, say, or discussing their qualities with knowledgeable staff. Canada Post has begun to offer physical space to e-retailers, he points out. Amazon.com opened a brick-and-mortar location in Indiana last February. 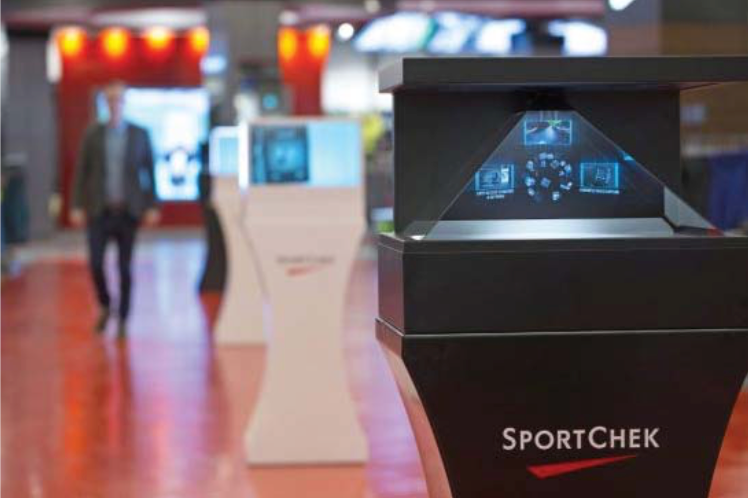 CHRIS SO
One of the 3D holographic displays for products in the new Sport Chek Square One shopping centre.

Beaming aerial footage of heli-skiers and GoPro-shot mountain bikers, this 3-D hologram-on-a-pedestal lends a flashy touch to Sport Chekâs tech-steeped store at Square One. âThereâs an aspect of entertainment,â says Paul Reid, in charge of digital installations. In a matter of minutes, the visual content on all 226 Samsung screens can be changed â to showcase pure winter wear if it begins to snow, for example. Robert Kozinets, marketing professor at York Universityâs Schulich School of business, notes âsecurity, service, luxury, and spectacleâ come through much more powerfully in a physical environment than through a fibre-optic cable. 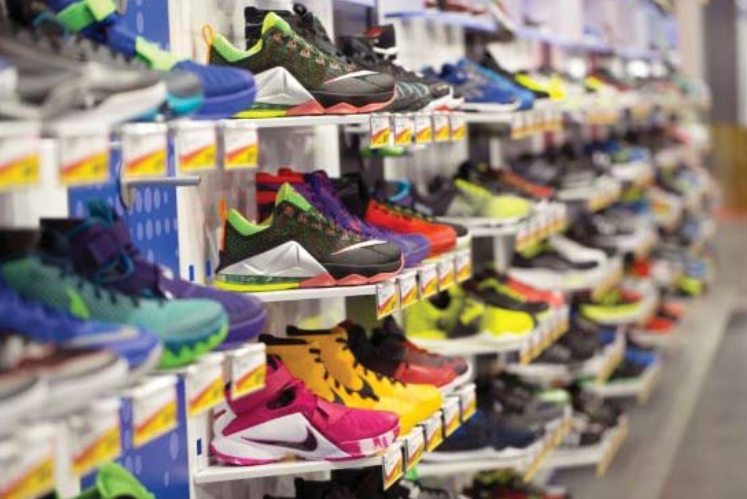 CHRIS SO
Some of the product displays at Sport Chek new store in Square One. Sport Check has invested heavily in technology at their new flagship store opening Nov. 19 at Square One shopping Centre.

Jake Boguski, digital technology manager for FGL Sports, shows off one of the 400-plus pairs of sneakers on display at the store. Employees or customers can swipe a shoeâs RF identification tag or bar code across a sensor hooked up to a flatscreen to call up product descriptions, prices and availability. âBringing that digital experience into the brick-and-mortar store is really the evolution of retail,â says Reid. 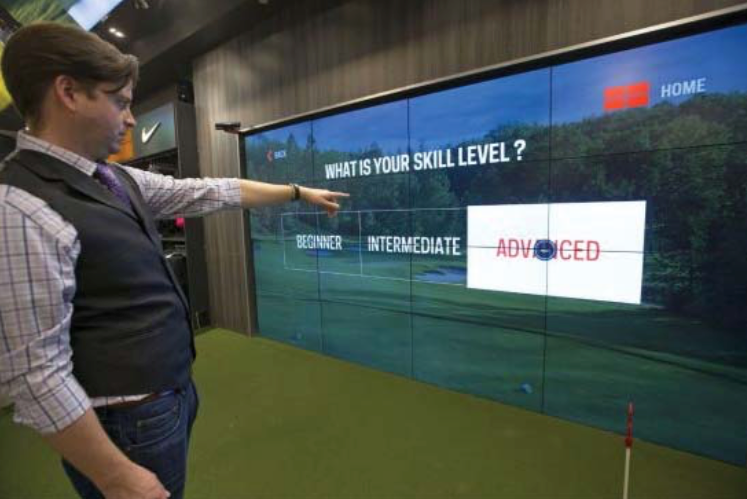 CHRIS SO
Solution architect for Sport Chek Daniel Lemmon demonstrates an interactive screen designed to help customers with a golf product just by pointing on boxes on the screen. Sport Check has invested heavily in technology at their new flagship store opening Nov. 19 at Square One shopping Centre.

Daniel Lemmon, charged with creating interactive applications for customers, shows off Sport Chekâs putting green, complete with an interactive âinfinity screen.â Courtesy of a sensor, users can point at the screen to select a golf brand, club type and their own skill level, yielding pared-down, customized club options. The nearby âflight scope simulator,â where would-be Weirs can swat golf balls, tries to bring the storeâs golf department on par with more specialized outlets like Golf Town. âItâs an experience you canât get on the couch,â says Reid, who describes it as âphygitalâ (physical and digital).

âWe were underperforming,â says FGLâs Lecoq, Two to three years ago, Sport Chek stores in Toronto (there are now 37) accounted for less than 40 per cent of the companyâs Ontario sales revenue. âThe GTA should account for more than 50 per cent.â In Canada, rising income levels and a widening consumer base will likely bolster revenue across the sporting goods industry over the next five years, predicts IBISWorld, a research group.

Micah Kalen, associate vice-president of new retail, demonstrates how customers can add a product to their cart, then complete the purchase on their own smartphone or tablet. âAlthough it may seem surprising that Canadian Tire and Sport Check are expanding retail in an age of growing online sales, this is exactly what they should be doing to stay competitive,â says Kozinets. âWhat retailers are discovering is that the flagship store is even more important in a reality where consumers have massive virtual choice.â 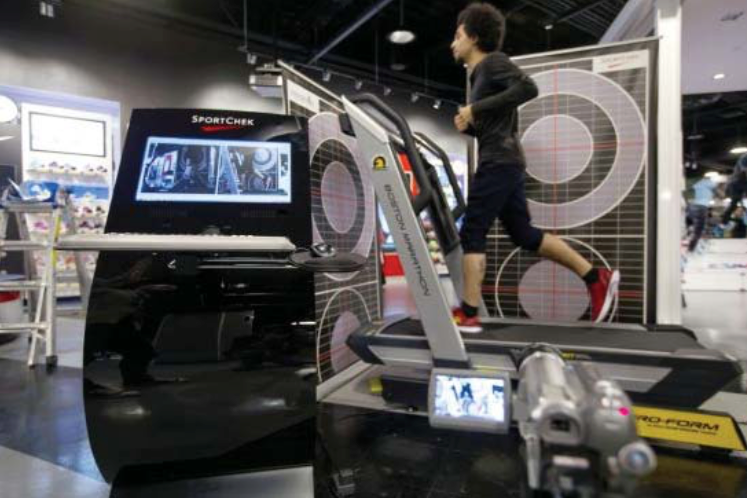 Watch how you step

Sport Chek âfootwear advisorâ Kris Russell demonstrates the storeâs stride-and-gait routine. A tripod-mounted video camera records customersâ canter in a particular shoe, with a slow-motion replay program at the ready for analyzing everything from leg inclination to foot angle. âYou can order shoes from 150 retailers online, but this brings advice and validation to the table,â says Reid. Floor staff â about 225, and almost all young people â arrive on the job with a specialty in at least one particular sport, providing expertise and personal experience. 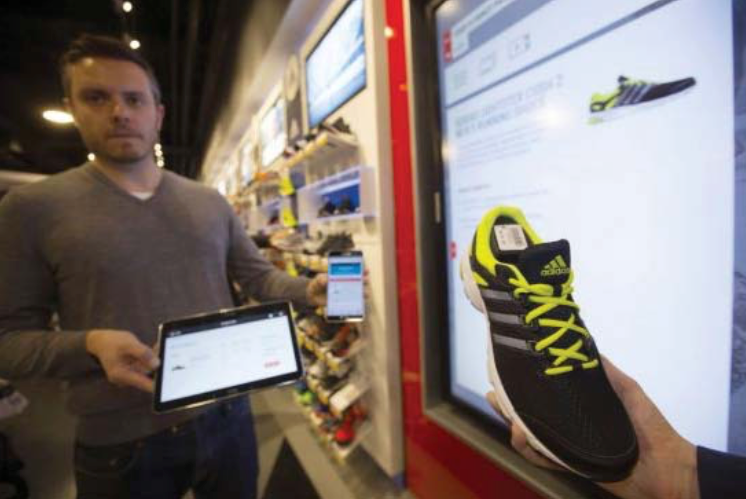 CHRIS SO
Jake Boguski, digital technology manager for FGL Sports, the parent company of Sport Check, shows an Adidas sports athletic shoe that has been embedded with contactless RF technology. This allow customers to walk to one of several monitors to get more product details which they can download to their own digital device such as a tablet or smart phone. Sport Check has invested heavily in technology at their new flagship store opening Nov. 19 at Square One shopping centre.

Sport Chek has been a big boon to parent FGL Sports, and to FGLâs owner, Canadian Tire Corp. The public mega-retailer posted a 20 per cent boost in profit in the third quarter and boasted $199.7 million in net income, up from $172 million in 2014. FGL, meanwhile, has extended a recent growth streak, due largely to Sport Chekâs same-store sales spiking 7 per cent year-over-year in the latest quarter. Sport Chek says it has enjoyed particular success with electronics â like GoPro cameras and âwearablesâ like fitness trackers â as well as team sport products.